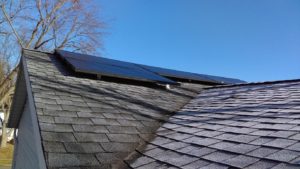 Since moving into our house in 1986, we have had 10 power outages. I now really support solar production after seeing the results since Nov 2016 installation.

I was interested in using solar power as a possible solution of power outages. Since moving into our house in 1986, we have had 10 power outages. I now really support solar production after seeing the results since Nov 2016 installation.

The panels were installed by Icon Solar in November 2016. I did not know about co-ops at the time. I joined Solar United Neighbors to be a part of solar advocates.

How well it works in even poor conditions.

What electricity savings have you seen since going solar?

I have three sections of panels-13 in one group, 4 in a second group both on the back-south side of the house and 5 on the front. The system can generate approximately 6kW/day on a good summer day. I do like watching our DP&L meter running backwards.