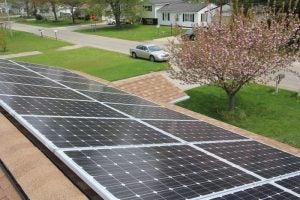 Eight years ago when I made the decision to go solar, I was tired of hearing people say that solar wouldn’t work in Michigan because we don’t get enough sun. I was determined to prove them wrong! The cost savings and environmental benefits were are a bonus.

Did anything surprise you about the process of going solar?

It was a fairly easy process, however I did not apply for net metering for a pay back on energy I send to the grid. It was a lottery process at the time and I was going to do it no matter what so I opted to just get credit on my electric bill as payment for excess. We still have so much educating to do with the general public, I still get asked so many questions and it is clear that people do not understand how it works with the grid. When I installed, battery storage was not affordable so now that it is, that is another opportunity for educating.

I generate about 70% of my annual electric needs. I went from spending on average $1200 – $1400 annually before solar to an average of about $400 now. I did some energy efficiency upgrades that need to be considered also like changing out all lighting inside and out to LED, all energy star appliances, etc.

If you plan on staying in your current home for the foreseeable future, if your house is positioned in an attractive way for solar, just do it! Do it while there are still federal incentives available.

If you have done it or going to do it, make sure to put your story together and share widely. There is so much educating to do and we still need pioneers that are willing to take a calculated risk. Just do it!