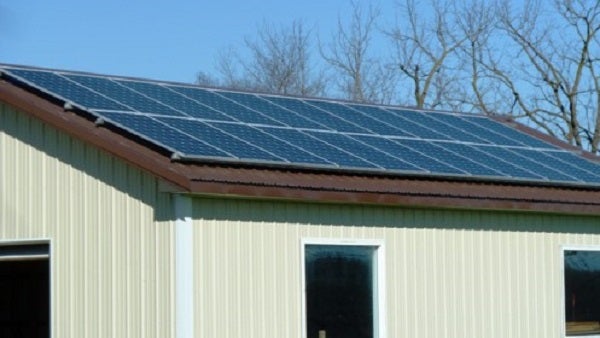 My husband loves monitoring his “retirement gift” (our solar array!) But it’s more for future generations than for us.

Earlier this year, we went solar. My husband called it his “retirement gift” to himself. Some men get sporty red convertibles or take a month-long cruise: we spent the money on 24 panels on top of my husband’s shop, which is wired up to our house. This has resulted in electric bills of only $15.30 for the entire household each of the last 3 months. Those bills rock! So our bills have fallen to the bare minimum (basic fees and local taxes) we pay our electric company, Shenandoah Valley Electric, while still “on the grid.”

So yes, we are still on the grid and also feeding back power into the grid for other users. That’s the part that feels really really weird, and good! We, or rather God’s creation up there called the sun, makes possible electrical power that we are able to use ourselves, and when we (plus the sun) “manufacture” extra, the literal power is “banked” and used by others.

We have learned a lot and that is perhaps the best part of this whole endeavor: learning how it works and also meeting some new people in the process. Last fall we began exploring the options through a local branch, Massanutten Regional Solar Co-op of a larger cooperative, Virginia Solar United Neighborhoods (VA Sun), which provided numerous educational opportunities (and lobbying at the state level, we learned). Any and all interested parties who wanted could go the next step to sign on to this cooperative in seeking competitive bids for our individual solar projects. My husband and I could have done the same thing on our own (researching and shopping), but it was helpful to go to informational meetings and then be part of an actual meeting where we reviewed bids from about five nearby solar companies, including voting on which company we would go with as a cooperative. The numbers (bids) they gave us are proprietary to the companies and not for public information.

Some of the niftier electronic aspects of the project were how the cooperative was able to do a roof review, using GPS and Google Maps of our property regarding where we wanted to put our “solar array” (as a set up is called), whether it was at a good slant for the sun, and whether trees or other obstacles would cast too much shadow.

If you’re interested in the technicalities, we got a 6.84 kW solar system with these specs:

The installation company we worked was Independent Solar Solutions LLC out of Bluemont, Va. and they were wonderful to work with, even though it took longer than expected due to winter weather and the total number of customers they were working with from the cooperative at the same time. We signed on in January and were functional by the end of April. We paid an initial 10% deposit down, another 20% when they ordered materials, another 30% when materials were delivered to the job site, another 30 upon completion of installation, and 20% after they got the inspection completed with the local building folks. Something we overlooked going into this was the need to add additional homeowners insurance on our house and property. It was not a big increase, but just saying.

Money wise, we hope to take advantage of the U.S. energy tax credit of 30% and at this time, we have no battery storage with the system—battery storage being pretty expensive. In Virginia, we are eligible for the net-metering program.

The bonus for us was being able to have electricity in our building, (including them digging a trench for the conduit to the building) which we’d been hoping to do for five years. So we can plug things in out there! My husband plans to finish wiring the rest of the building for his shop.

After the array was installed and we were up and running, the company also provided our own webpage or monitoring platform to keep up with our daily status. My husband loves this and is as regular with checking our usage as I check status updates on Facebook.

We are happy we made the system as big as we did (adding 2 panels at the last minute when the installers discovered there was room for 2 more on that roof). Husband is already saying he’d have been kicking himself the rest of his life if he hadn’t added that additional capacity. A really good day is when we generate 40 kilowatts of electricity. A mediocre cloudy day results in production of 10-15 kW.

Payback: Where electricity rates rise 3% a year, payback is considered complete in about 12-13 years, according to notes I have from one installer (not the one we went with).

As my husband also says, “This is more for future generations than for us. It’s just something we wanted to do for a long time.”

In its first three months this is what our little system has done for the environment: