We’re in the middle of a quiet revolution. Like the Industrial Revolution in the 19th century and the Digital Revolution in the 20th, new technologies are driving sweeping change and creating the potential to dramatically shift how power and wealth are distributed. Increasingly affordable solar power is leading this new 21st Century Energy Revolution, potentially allowing us to upend the traditional domination of our energy system by monopoly utilities so that we can build something called energy democracy. 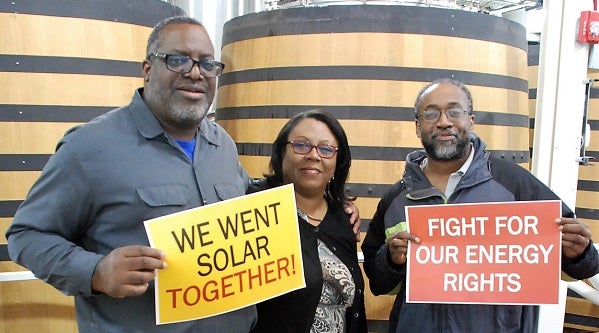 Put simply, energy democracy is our vision of a cleaner and fairer energy system. In such a system, power—electrical, political, and economic—is shifted from the few to the many. Rather than a few monopoly utilities and their shadowy, distant investors dominating the energy system, everyday ratepayers have a seat at the table. That means we get a say in how and where electricity is generated, and we can share the financial benefits of ownership. In short, energy democracy directs control of our energy system back to local communities.

How our energy legacy holds us back

Traditional energy generation facilities—think coal-fired or nuclear power plants and hydroelectric dams—were very limited in where they could be located. Fuel-burning facilities needed to have easy access to lots of fuel and hydroelectric dams needed to be on major waterways. These facilities were large and expensive, making ownership accessible only to wealthy companies. They also made bad neighbors due to the side effects of energy production, like pollution. Given these realities, it made sense for power generation to happen far from where people lived and worked. The electricity produced would then be transported great distances via the transmission grid to where it was needed. This concentration of capital and infrastructure created a concentration of power, with a few large companies selling electricity to the rest of us.

To protect the public, state and federal governments set up agencies to regulate utilities and balance their interests with those of the public. In Pennsylvania, our Public Utilities Commission (PUC) plays this role. However, due to the complexity of the issues before them and the often-byzantine nature of the rulemaking process, utilities—with their teams of high-paid lawyers and engineers, not to mention large campaign contributions and the revolving door between regulators and industry—traditionally exert far more influence on PUCs than the public. The end result is a system that is unfairly dominated by utilities.

Represent Us, Not Utilities Pledge

As affordable distributed solar continues to spread, it is changing the underlying conditions that allowed monopoly utilities to dominate in the first place. John Farrell, Director of Democratic Energy at the Institute for Local Self-Reliance (and Solar United Neighbors board member), describes these conditions as the “four Ds of energy democracy.”

When all four of these forces work together, we have the potential for an energy system where benefits can and should be broadly shared.

Of course, even as it becomes cheaper, solar PV is still not an option for many. But with measures like community solar, which can make solar accessible to renters, homeowners with shady or otherwise inappropriate roofs, and even low-income households, we have the ability to create a truly democratic energy system.

For the revolution to be successful, new technology alone is not enough. Utilities wield too much power over the energy and political systems. That’s why we’re calling on solar supporters to urge candidates for office not to take donations from monopoly utilities. If we’re going to change this reality, it will take an informed, engaged, and active movement of people who are willing to fight for it.

This is where you come in and where we can help. Not only can we help you go solar, but we can help you join the movement for energy democracy.