How does solar energy work?

Modern solar photovoltaic (PV) systems have two important parts: a collection of solar panels, called an array, and one or more inverters. Your solar array generates electricity from sunlight, and the inverter(s) make the electricity usable in your home. In addition to the array and inverter(s), there are also connecting cables, racking, and other minor parts referred to as the balance-of-system (BoS) components.

What is a solar array?

A group of solar panels wired together on a rooftop (or on the ground) is called a solar array. Individual solar panels are made of PV cells. These cells are made of refined semiconductors, typically silicon, that convert light energy from the sun into electricity. When light hits a solar cell, it generates a type of electricity called direct current (DC). 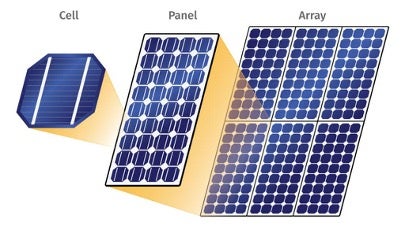 DC electricity isn’t compatible with most American homes and appliances, which run on alternating current (AC). Your solar installation will include one or more pieces of equipment called inverters, which convert the DC electricity from your panels into AC electricity that your home can use. 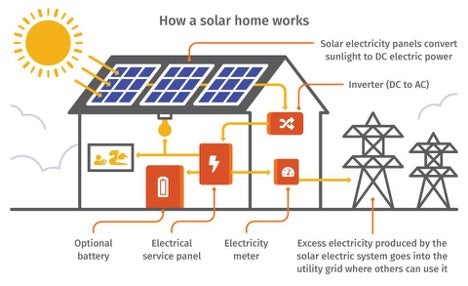 Most solar homes remain connected (tied) to the electricity grid, seamlessly transitioning between consuming on-site solar electricity during the day to drawing electricity from the utility grid at night.

What happens when the power goes out?

During a power outage, active grid-connected solar panels can be dangerous for utility line workers. Your solar array will automatically shut off to prevent back-feeding electricity into utility lines that are being repaired. You will need a home battery backup system in order to power your home when the grid is offline.

What is a solar inverter?

The simplest type of inverter is a central or “string” inverter, which is installed near your home’s electric panel. Central inverters convert all the energy from your solar array into AC electricity at a single point, effectively treating your array as one large unit. Central inverters operate most efficiently if none of your panels are shaded by nearby buildings or trees; if even a few panels receive shading, reduced efficiency may result.

Another option is a set of microinverters, which attach to the panels directly and optimize the electricity generation of each individual panel. This means that if one or more panels receive shading, the energy output of the other panels won’t be affected. Microinverters can be more expensive to install but have the added benefit of monitoring how much energy each individual panel produces.

How long do inverters last?

Central inverters are typically warrantied for 10-12 years; microinverters for 25 years. By comparison, your solar panels will typically last 25 years or more without significant performance degradation. Your installer will recommend an inverter configuration that best meets the needs of your custom installation.

Next-> Battery storage and solar energy