Become a leader in the Maryland solar movement!

As Solar United Neighbors continues to grow the solar movement in Maryland, we are excited about new opportunities to organize and mobilize our base of solar supporters. Advancing solar policies that expand solar access and ensure that the rights of solar homeowners are protected is key to building Maryland’s clean energy future.

We must work together to create a clean and equitable energy system that directs control and benefits back to local communities, with solar on every roof and money in every pocket. To help us get there, we’ve created a new initiative to help organize our network into an advocacy force to be reckoned with: the Maryland Solar Action Team!

The Action Team will be led by active volunteers and our Maryland Program Director Lauren Barchi, who will empower its members to be strong solar advocates in their communities throughout the state.

The Action Team’s main goals will be to increase the number of solar supporters in the state who are comfortable and motivated to engage with their elected and appointed representatives via email, phone, in-person meetings, public hearing testimony, and direct lobbying. A large part of this initiative will be training those Action Team members to be confident in their work and messaging. The Action Team will engage solar homeowner advocates on priority legislative and regulatory issues both at the state and local levels.

The teams first primary legislative focus will be helping to pass the Clean Energy Jobs Act, which would increase renewable energy production in Maryland to 50% by 2030 and increase local solar power by six-times.  While a version of this legislation came up short last year, we’re confident that working together with our diverse coalition partners—and with your support—we can pass this vital bill in 2019.

We hope you will join the Solar Action Team program to build a more powerful grassroots network of empowered solar advocates in Maryland. 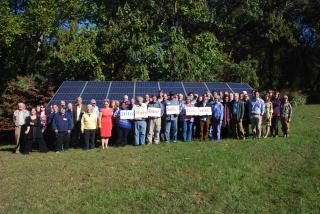 Contact your representatives to tell them you support the Clean Energy Jobs Campaign to strengthen the local clean energy economy by moving the state’s RPS target to 50% by 2030 and increasing the requirement for in-state solar to 14.5%.